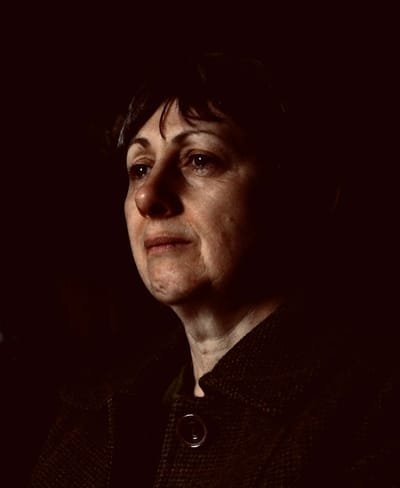 Although born in South West London, I grew up in Oxshott, Surrey. My father was a Jazz Musician, Military Cartographer and Author ( Arthur Banks ) & I spent much of my time watching him draw beautiful maps in his studio which was annexed to our house, so Dad was probably the catalyst for me to consider Art as a possible career. His piano playing must have triggered something inside me as well because music is still a major love of my life.

Fast forward to the 1980s when I emigrated to Groningen in the Netherlands.
My partner was dutch, we'd met in London. Alie Blok was a Silversmith and encouraged me enrol onto a General Art and Design B/Tec course in Stepney, East London. It was a great time & I fell in love with Fine Art then and there, spoilt by all the wonderful Art Galleries, Exhibitions and Music at that time.

After graduating, we decided to up sticks & leave the UK. In September1988 I enrolled at the Art Academy "Minerva" in Groningen to study Fine Art Painting adding the dutch Diploma ( at the time equal to a B.A. degree ) to my achievements in 1992.
I was very earnest about portraiture, still life & figurative painting. However & fortuitously, a friend the classical musician Yvonne van den Berg, also notably later Head of Classical Music at the Arts Centre "De Oosterpoort" in Groningen introduced me to the work of two composers Stravinsky and Messiaen. Their music changed my whole artistic direction and I was compelled to switch to total abstraction. During one of my solo exhibitions in Groningen, a visitor termed my paintings to be "Lyrical Abstraction". I thought it kind of summed up my painting as it combined paint, music, landscape and spirituality, music having been a big part of my life has woven its way into my work ever since.
I began to exhibit around the Netherlands at this time.
However, Alie had been seriously ill with Multiple Sclerosis since we met in 1984. Alie died a beautiful death via euthanasia in 1997 at home, surrounded by friends and loved ones.

Its a long story so I will spare you the details until the autobiography is published! but ... in 1998 I repatriated to England and ended up marrying much to my and everyone's surprise the musician Dave Swarbrick in Coventry, 1999.
I continued painting, Dave had had the attic rebuilt as a studio for me and I had a few exhibitions in and around East & West Sussex.
When we first met, a lifetime of heavy smoking had left Dave with "end term" emphysema - as consultants succinctly put it. We were pretty hard up financially so Dave and I now as his roadie toured Britain and abroad with a car loaded like a bomb with oxygen cylinders, a wheelchair and travelling companion our terrier called Millie.

Dave and Christine Pegg  ( Fairport Convention  and Cropredy Festival ) heroically and selflessly staged two big benefit concerts to keep our heads above water  called "Swarbaid" and "Swarbaid  2 " in Birmingham.
It is at least nine but probably more occasions when he had to be hospitalised into intensive care units. They became almost a second home during our marriage! I have a pathological dread of hospitals now.
Dave was miraculously given a double lung transplant and permanent tracheostomy in 2004. The incredibly compassionate donation of lungs by a stranger eventually enabled Dave a near normal life again & his music flowed, he was back on stage again and writing beautiful compositions. I could paint full time once more and in between abstraction I enjoyed composing genre pieces too.

In 2012, I was appointed Artist in Residence to Coventry Cathedral for their 50th Jubilee Year. I produced a number of works as well as finishing my residency with painting the portrait of their Dean, the Right Reverend John Irvine. John was leaving after ten years of devoted service, the Cathedral Friends traditionally commission a portrait of the leaving Dean on such occasions to hang in the Provost's Vestry. My portrait of John hangs there alongside portraits of Deans from the past fifty years ( the new Cathedral standing shoulder to shoulder with the bombed ruins of the old building was designed by Basil Spence and consecrated in 1962 hence the jubilee ). It was an honour and a most enjoyable time professionally for me.

I continued painting private commissions, Dave still gigged and recorded into his mid-seventies despite increasing health issues. He started to need to use a wheelchair again and we realised that time was precious. So, in 2015, we left city living and sought the bucolic peace and bliss of a pretty little cottage in the Dyfi Valley, Snowdonia.
My work absorbed the pure beauty and sublimity of Gwynedd. I made many friends for life there...


So tragically, in January 2016 after playing a benefit concert for refugees in Machynlleth, Dave caught a nasty bug. His immune system was of course always compromised because of the transplant, etc.
For the next five months he was back in Intensive Care units in Aberystwyth, then Birmingham then back to Aberystwyth where he peacefully passed away on 3rd June 2016.

The furore & aftermath of Dave's death was a living nightmare, the paralysing loneliness and abandonment is something I will never forget. Bereavement hit me like a train, and having lost both my life partners in under 20 years I was emotionally and professionally crippled.
With the love and support of great friends... I survived.

I started painting hesitantly again in the Summer of 2017 and it made me feel that I had more purpose to Life. I planned with a friend a UK tribute tour to celebrate Dave - he left instructions for there not to be a funeral of any kind, which I honoured totally - and enrolled to study for my Masters Degree in Fine Art Painting at Aberystwyth University, the School of Art in 2017.
The tour was extremely cathartic and a means to connect for a last time with friends, fans of Dave and Folk Clubs that had been our life for over seventeen years. The Post-Grad degree poodled along meanwhile in the background.
Gradually, my work morphed onto another level while studying in the second year at Aber', & I reconnected with Lyrical Abstraction. The camaraderie at the School of Art was that of a big family ( Hotel California? ), they supported me, trusted me and left me alone to get on with working from my studio at home. I graduated in 2019 with a distinction.

I love Mid Wales so dearly but it rains & it rains...
I had a painting in an exhibition in Somerset in January 2020. The day before, all the roads flooded and I was actually unable to make it out of Wales to the exhibition Opening! That was the catalyst to move on as it was impossible to continue like that.
Serendipity...? A man knocked on my door one day in May & made me an offer out of the blue on my cottage! It set a seed and eventually I sold up and moved temporarily to Wiltshire, living out of a suitcase with my little dog "Ruby" staying with a dear friend for four months. It gave me stability and the opportunity to house hunt.

In Spring, I found this place down in the SouthWest of England, overlooking Dartmoor which is where I live and work now.
The light is incredible. There seem to be constant rainbows, the landscape is awesome, the people so friendly and although we have a lot of mizzle, it blows through quick enough.